We already got the opportunity to make a few reviews of EP’s by Aube L. This French autonomic artist now strikes back with a new album revealing 10 songs. Aube L is first of all an artist with a particular timbre of voice. She’s playing with her vocal skills in a quite experimental way, which sometimes gives you the impression of hearing an extra instrument or yet a kind of effect. She’s able to sing like the sound of whales and sirens. It’s a particular experience and for sure the main characteristic of her work. From the very first song Aube L invites the listener to join her mystic universe, which musically is an offspring between pop and rock music. The songs reflect a kind of sadness, but still a part of reverie. But the album really starts to get interesting when she’s experimenting with sounds and even a touch of neo-classicism. “Like A Bonfire” is a pretty cool song that might evoke the experimental and very personal touch of Björk. This is also one of the songs sung in English, but the main tracks are sung in her mother tongue. “S’Offrir Le Monde” is another noticeable song and I here even can speak about a real beautiful composition, which has been meticulously built up. I also like the lyrical content of this song. Another and somewhat similar track is “Le Roi Des Ombres”, which clearly confirms this is an artist with her very own approach and genre. A last and essential element of this release consists of the artistic digipak, which simply reminds us that CD format always will have this little extra compared to digital platforms. Conclusion: I don’t like all the songs at this album, but there are a few beautiful compositions on it revealing the proper sound of this artist. 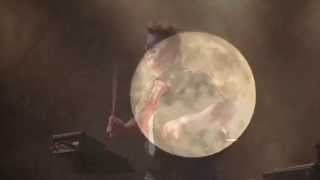